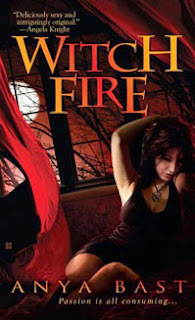 Witch Fire
Description:
Mira Hoskins doesn’t know she’s a natural-born witch who possesses the rare – and powerful- element of air. And she never expects to find herself tied to a Mahogany bed frame, captive of a man who aches to fill her every desire and let loose the magick that dwells inside her…
Heat emanates from elemental fire witch Jack McAllister. The coven, a governing authority of witches, has sent him to protect Mira from a band of warlocks who drain witches of power… and life. Long ago, he saw Mira’s parents murdered by the same dark magick. He’d like to quell his guilt and offer her everything she deserves. But she’s the long-lost cousin of his boss- making seduction off-limits.
With Jack’s strong guidance, Mira is luring forth her inner magick. But his sense of duty is quickly swelling into insatiable hunger. He was warned about the natural attraction between air and fire. Now he risks being consumed by the woman he shouldn’t want- but can’t stay away from….
Review:
In this book we have Mira, a divorced waitress, who has no ideal that her world is about to be turned upside down. She’s really a very rare, and very powerful, air witch who is in the middle of a war between witches and warlocks. Jack, a member of the Coven, was sent to protect Mira from Duskoff International. Jack quickly finds that he wants to teach Mira about more than just her Magick. He wants to teach her about how great sex can be.  While they focus on trying to ignore their feelings by training Mira’s magick and keeping her safe from the Duskoff their growing sexual tension is almost unbearable.  Mira is then taken by Duskoff. Now she must fight to stay alive while Jack and the coven rage a magical war in the hopes of being able to save her.
This is the First book in Anya Bast's Elemental Witch series.  Anya Bast did an amazing job with this book. I felt she brought together this story of the battle between witches and warlocks wonderfully. This book is filled with just the right amount of sexual tension, magic, hate and lust to keep any one reading. 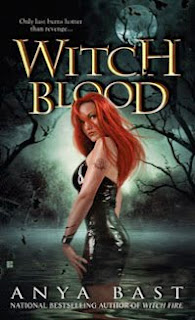 Witch Blood
Description:
A water witch, Isabella Novak has always led a chaotic, nomadic existence. But her life spins out of control when her sister- her only friend and emotional anchor- is killed by a demon. Driven by grief and desire for revenge, she turns her back on the Coven and its sacred rede: Harm ye none…
When Isabella first encounters Thomas Monahan, she’s running on pure rage and sorrow, channeling her pain into power- and trying to freeze the life out of the warlock she holds responsible for her sister’s death. Together she and Thomas form an uneasy alliance to hunt and destroy a demon of tremendous power. As head of the Coven, earth witch Thomas must thwart Isabelle’s dark impulses, but his very presence stirs deeper desires she never knew she had…
Review:
Here we have Isabelle, a wild water witch who trusts no one . She is hell bent on destroying the man she holds responsible for her sister’s death, Stefan the new Duskoff international leader. (which leads to a really hot scene where she tries to freeze his man hood off.) The head of the Coven, Thomas, stops her just in time and reminds her that witches agree to “harm ye none”. Thomas promises to help her bring the demon that Stefan released to justice. Together with the coven they hunt a very powerful demon hell bent on stopping it from killing witches in order to open a portal to his world. All the while Isabelle and Thomas try to deny their growing relationship. This love story is a really sweet one that pulled on my heart stings a little.
This is the second book in the Elemental Witch series. Anya  Bast turns the story up and gives you a lot of background information, however she does it without over whelming you with so many details it bores you. This book has a wonderful mix of hot love, dangerous battles and worlds beyond our earth. 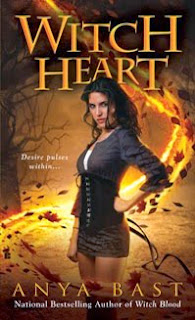 Witch Heart
Description:
With a strange and powerful type of elemental magick, Claire isn’t destined to remain a demon’s handmaiden. Yet this has been her fate since she was six, when her warlock mother brought her to Eudae. Now an adult, she’s about to discover her true power- and how far others are willing to go to take it away….
As part of a coven mission, Adam Tyrell rescues Claire from her enslavement- and finds himself immediately taken with the beautiful witch. But this charming playboy soon learns that it’s easier to steal Claire from demons then to win her heart, for her life as a servant has ravaged her spirit. But Adam’s determination to protect her from the warlocks who want to harness her magick for evil begins to weaken Claire’s resistance- and in the seat of danger they find themselves surrendering to the lure of their deepest desires.
Review:
This book mostly follows Claire, a human witch, who was sent to live in the demon world of Eudae by her mother when she was just a child. There she spent her life as a demon handmaiden, until the rouge demons of her land attack her owners in hope of getting a hold of a very powerful weapon.  Claire’s demon owner then places this magick within her and sends her to earth hoping to keep this magic out of the hands of evil. Once on earth she finds that no one knows about witches and that she is completely alone. Meanwhile the Coven gets wind of a powerful witch in need of help and sends Adam out to get her. He is instantly drawn to Claire but living the life she has she knows little of love and fears what her owner will do to Adam if she gets involved with him. Claire must learn to use the magick within her without killing herself while Adam struggles to keep her safe from not only the evil that seeks to kill her but from her own fears.
This is the 3rd book in the Elemental Witch series by Anya Bast. Anya again brings us a powerful story with the members if the Coven seeking, first to save Clair from her life in the demon world of Eudae, then to save her from some rouge demons hell bent on taking the very powerful magick within her. Love and magick make up this wonderful tale that will leave you wanting more. 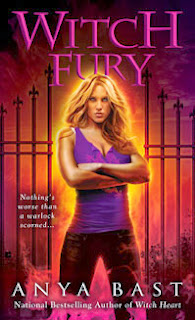 Witch Fury
Description:
Sarafina Connell is having the worst week of her life. It takes an even darker turn when an infamous playboy kidnaps her and reveals a world she never knew existed….
It’s a world where magick is real, and where Sarafina is given a chance to join a secret cabal that is bent on gaining absolute power. They could use a woman like her- a witch with an untapped gift for creating fire. But she isn’t about to get in league with the devil.
Rescued from her captors, Sarafina is introduced to a coven that is duty- bound to fight the forces of darkness. She’s pleased that her savior is the imposingly seductive Theo- until the trust between them goes up in flames. Sarafina and Theo realize they have no Choice but to unite in the battle for supremacy- that’s getting hotter by the minute.


Review:
This book is about Sarafina as much as it is about Theo. Sarafine is kidnapped by Duskoff International’s head guy Stefan. She is shown the world of magic and told of Stefan’s plans to have absolute power. She wants no part of it and fears she may not have a choice. Meanwhile the Coven plans a raid on Duskoff and asks Theo to help. There he finds Sarafina, who he mistakes for a warlock and takes back to the Coven headquarters to question. Soon he finds out that she was abducted and the memory of his own abduction by Duskoff comes flooding back.  Sarafina informs Theo that she was awakened by a witch with red eyes, but that’s not a witch it’s a demon who seems to have taken a liking to Sarafina and will stop at nothing to get her. Theo must now protect Sarafina from the demon, as well as fight with the coven to stop Stefan once and for all. The coven and the Duskoff will never be the same.
In this, the 4th and final book of the Elemental Witch series, we find that our Author, Anya Bast, has brought an equally worthy and devastating end to this wonderful series. Alliances will be made and for some of our most loved people, life will never be the same.
Also head over to Anya's website for Micah’s Magick, the final story in the Elemental Witch series. This is a wonderful short story about a member of the Coven named Micah.  This little story will give some added closer to the whole series.
~ Simmy ~

Highland Hussy said…
I have only read Anya Bast in a short story, and I liked her. But after seeing your review, I think I'll look into this series...thanks for reviewing all the books, and not just one :)
May 2, 2010 at 1:08 PM

Book of Secrets said…
Great post! I have this series in my to-be-read pile. Sounds so good! I loved Anya's Embraced (Vampire) series from Ellora's Cave. Looking forward to reading about her witches!
May 2, 2010 at 9:03 PM 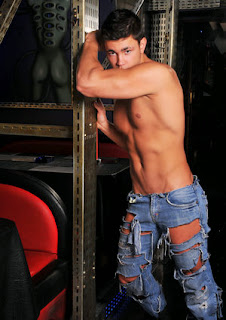 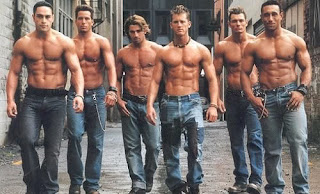